During the days which preceded the Champions League final in Cardiff, London became a popular destination for the numerous juventus fans who were travelling to Wales. On Thursday 1st June, we have been invited by the journalists Dario Donato and Eleonora Boi to participate to a live broadcast from the London Eye, together with our friends from the Juventus Club Altamura Bianconera. Apart from the two leaders of the italian club, the well-known president Carletto and Francesco, we also the met six people who had travelled from Altamura to England with an old Fiat cinquecento. Our friends from Puglia gave us an appreciated present: the legendary friselle of Altamura, one of the specialties from the italian town. Among the many questions which we were addressed by the journalists during the live broadcast, Riki was asked who would be the man of the match for Juventus in the final. Riki had no doubts: “Mario Mandzukic”. And he got it right: infact Mr. No Good has been one of the few players to shine during the dissapointing match, mainly thanks to his wonderful goal.

Friday 2nd June, the day before the final, we received a visit from #AMessage forJU at the Pub Famous Three Kings. The initiative sponsored by Juventus involved a black and white Jeep, driven by Dj Victor Kwality, to travel across Europe and collect the singatures of the Juventus fans who are spread among the Continent. The banner with these signatures was held on the Juventus stands during the final. La Jeep left from Moncallieri, a city close to Turin, and made several stops in Germany, Belgium and London, before reaching its final destination in Cardiff. Several members of Londra Bianconera, waited for Victor and the cameras of JTV in front of the Famous Three Kings, and showed the great passion for the bianconeri in Great Britain. 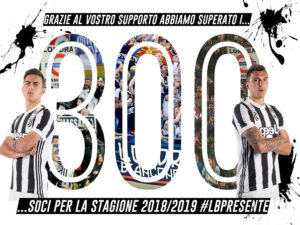